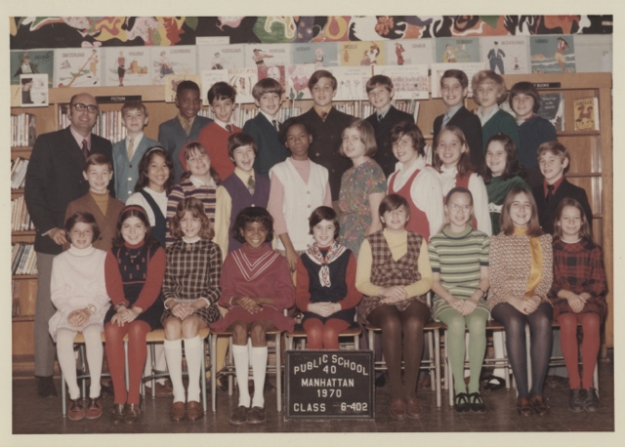 In my elementary school (P.S. 40 Manhattan) there was a clique of girls who stuck together from kindergarten through sixth grade. The two ringleaders were Wendy and Julie. They decided who could be popular, who was tolerated, and who was excluded. I was excluded, which wasn’t all bad, because I didn’t want to play with the girls. But they also decided that I had cooties. Consequently, I could not play with anyone else.

I never learned how to jump rope, play jacks, hula hoop, use a pogo stick, or do those hand clapping games (Miss Mary Mack).  I wasn’t allowed to play with the boys either. I endured seven years of line-ups and recess being teased and called names.

My mother blamed me for being picked on. She told me that if I was more friendly with the girls they would play with me. That I should join in the games anyway. I should make an effort to fit in with the girls. If I didn’t learn how to make friends now then I would never have any friends at all. I knew better. I knew what was wrong. I knew not to try to explain it to anyone. I tried to keep a low profile, to stay out of their way, hoping the girls would forget that I was there. Hoping they would forget I had cooties.

It is impossible to know in hindsight whether I was picked on because I was a gender non-conforming kid, or because I was shy and odd. Adults were upset because I was obstinate in my tomboy-ness, and dismissive of all things girly. Girls knew I was vulnerable and weird. Boys were off in their separate universe.

The administration at P.S. 40 only cared that I tested above grade level and that there was “no trouble”. The principal told my parents that I needed to learn how to play nicely with the other girls. I was supposed to work it out with Wendy and Julie. You can imagine how that went.

I was fortunate to get into a specialized academic high school; Wendy and Julie went to the local one. I saw them around the neighborhood, but they never spoke to me. I was of no use to them.

When my mother died, my brother and I cleaned out her apartment. We found all of our elementary school class pictures. There I was, year after year, posing with my tormentors for the photographer. When I look at my class pictures I can remember what it felt like to have cooties. How much it stung. How angry I was. How humiliated I was. How I was going to get even. How I was going to show them.

When I look at my class pictures all I see are girls and boys. I started with sixth grade, and worked my way back. I was finally able to remember which girl was Wendy and which girl was Julie. In the class picture, I am in the front row, wearing the brown plaid jumper and the tan turtleneck. Julie is sitting next to me, smack in the middle of the row (in red, white, and blue). Wendy is in the second row, the second child in on the right (wearing the green dress).

It would be nice to end this post with some platitudes of how I forgave Wendy and Julie, or how I overcame adversity and was popular in high school. Bullying leaves it scars, at least it did on me. I still have an aversion to cliques, all things girly, and teasing that has a streak of meanness. I am still shy and slow to make friends. I still mistrust conventional adults because they chose not to intervene, leaving me to fend for myself. I will always associate groups of girls with cruelty.

8 thoughts on “Did You Ever Have Cooties?”