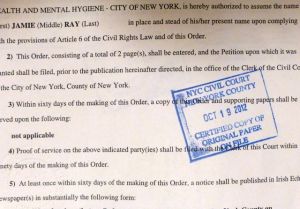 October 19, 2013 was the first anniversary of my legal name change. It is the best thing I ever did for myself.

I first thought about changing my name in my early twenties. A lot of butch women (wimmin, womyn, or w/o men) did. They chose names like Willow, Blue, Shad, Birch, and Sky. They used their initials like JP and DJ. They took nicknames; Barbara became Bobby, Andrea became Andy. They did not take names like Michael, David, James, or Robert (the top four boy’s names the year I was born). I told Donna that I was going to take an urban name like Concrete, Asphalt, or Fire Hydrant. She did not take me seriously.

When I accepted that I was trans* I knew I had to change my name. I never liked Amy. I never felt like it fit me. I’ve written about recognizing that I could not be happy as an Amy, and I’ve written about the logistics of changing my name, but this is how I got my name.

I thought it would be easy to pick a new name. It wasn’t. At first, I let my thoughts drift to different names. Nothing clicked. Then I concentrated. The name had to swing both ways, like Randy, Sandy, or Terry. It had to be suitable for my generation (no Aidans, Jaydens, or Justins). I had to be comfortable using it professionally. It had to sound right with my last name. Donna had to take it seriously.

I found fabulous dog names (Beckett, Hudson, Echo, Cocoa, Mango, Yogi, Spike, and Bagel). But none of the human or canine names felt quite right for me. I didn’t want a name that might end up feeling silly or pretentious. I’m not a dog. I waited it out. I got impatient.

Every day I walked to work and thought about names. Over and over. I’d say them out loud. I’d look at myself in store windows and call myself by the name. I’d practice introducing myself to thin air. I was considering settling on Charley.

Every morning I go to the Starbucks in my office building, in the Financial District. I am known there as “Grande dark personal cup.” I have a Starbucks loyalty card, and for every 12 drinks I buy I get a reward. I don’t use my freebie for another $2.29 Grande, I want my money’s worth. I get something pricey. I’ve read that the most expensive drink you can get at Starbuck’s is a Quadriginoctuple Frap, but I usually get a three shot latte. I order it hot in the winter and iced in the summer. It is supposed to be a treat, not a dare.

I never get the freebie at my regular branch. I don’t want to confuse my regular baristas by changing my order. They know exactly what I want when I walk in. I went to the Starbucks on 8th Avenue and 13th Street, and I asked for a triple iced latte for Amy. The barista took my order, wrote on the cup, and swiped the reward off my card. Next thing I knew another barista was holding up a drink asking “Jamie?”

The moment I heard him say it I knew that Jamie was my name. I thanked him more profusely than anyone has ever thanked a barista in Starbucks history.

30 thoughts on “The Name Game”