I spend a lot of time thinking about how people see me and what I look like. Not because I am vain and stylish, but because my mother was obsessed with making me look like a girl. We were both unhappy with how I looked; we had different ideas on how to solve the problem. 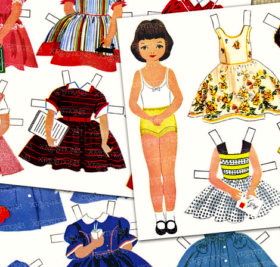 By the third grade I had acquired a wardrobe of drab unadorned dresses, and dark Oxford shoes. While I despised these clothes, they were the least objectionable of what was available. I wore them like a prison uniform. The clothes were ugly. but innocuous enough that I could numb out in them. I refused to inhabit them. I daydreamed my way out of them.

I changed as soon as I got home. I had some girl clothes I could tolerate and some hand-me-downs from my brother that I cherished. I avoided the mirror unless I was wearing clothes I felt comfortable in.

My mother was determined. I refused to make any effort to look like a girl. She bullied me. I didn’t budge.

It was a dreary battle that went on for years. The kind of battle that makes a child sullen and stubborn. An argument that got imperceptibly meaner each time it was fought. My mother was sharp-tongued and vicious. She would yell at me and I would stand still and try to let the sound bounce off of me. I would concentrate on the syllables and ignore the meaning.

Day in and day out she sniped at me. I tried not to argue back. I wanted to defend myself but when I did it backfired. It gave her more ammunition. I avoided talking to her. I did my homework. I read books. I stuffed myself with food. I pulled myself into my own thoughts. I pretended to be a boy. I watched baseball on TV. I listened to music. I killed a lot of time.

Every sentence was loaded. Every conversation ended with raised voices or slammed doors. I thought this was how all mothers behaved in private. She pretended to be nice when there was company, but the moment they left she reverted.

I did not realize that my mother’s behavior was out of line until I was in my teens. I did not tag her as abusive until I was in my twenties. I thought I got what I deserved. I thought it was my fault; if I’d been “normal” everything would have been OK. I half believed her when she said I was over-sensitive and couldn’t handle constructive criticism.

I convinced myself that the solution was to go away to college. That once I got away from her I would be alright. I thought I was leaving my mother behind but I carried her with me. I did not realize how much damage had been done; that her obsessions had become my obsessions. I did not realize much how much work I had to do, and still have to do, to be free.

28 thoughts on “My Mother’s Obsession”