On January 14, 2014, I participated in the panel “How to ACT UP” at the New York Public Library. In keeping with the title, I unexpectedly outed myself as trans. In front of several hundred people. 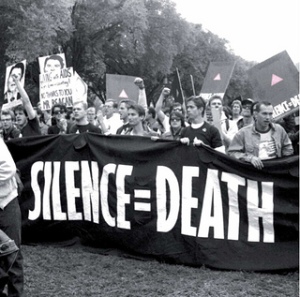 I spent seven years in ACT UP (The AIDS Coalition to Unleash Power). We demonstrated by marching in the streets, disrupting FDA hearings, and throwing the ashes of our loved ones over the White House fence. We were trying to save lives and the government wasn’t paying attention. The drug companies were overcharging for ineffective drugs. My buddies were dying. We were consumed with anger.

I was one of many activists who burned out. When I left ACT UP I lost contact with most of my activist friends. I went back to my normal life. I became unmoored. I was not the only member who suffered from loneliness and the loss of meaning in my life. We started talking to each other again after Spencer Cox’s death. We did not want to lose another comrade.

There were six of us on the panel; Ron Goldberg, Jay Blotcher, Mark Milano, Alexis Danzig, Matthew Rodriguez and I. The auditorium was full. There were some current members of ACT UP, some veteran members of ACT UP, and assorted fellow travelers. We discussed the art of protesting, past and present.

Then we took questions. Mariah Lopez rose and talked about how ACT UP did not pay attention to transgender issues and that as a trans woman of color she had lost many friends to AIDS and all of her friends were HIV positive. She chastised the organizers because there were no transgender people on the panel. At which point I was elbowed in the ribs by Ron and Alexis, and someone else shouted out that there was a trans person on the panel. I got the microphone.

I thanked Mariah for raising the issues because these are things we don’t talk about publicly. I wish I had added that ACT UP had been remiss in dealing with the HIV epidemic within the transgender community. ACT UP had raised it tangentially in relationship to sex workers and intravenous drug users, but not actively in our regular discussions about harm reduction, access to drugs, and access to treatment. Instead, I blurted out that I identified as transgender. That you may look at someone, and listen to them, and not know that they are part of the transgender spectrum. That it is a mistake to assume that I am a butch lesbian and stop there. I gave back the microphone. The questions and answers continued, but I was sweating.

I tried to speak to the room. I did not want to embarrass Mariah; she is a fellow activist. I also felt that she had trans rank over me. I see her as “really” transgender and I often see myself as “faux” transgender, i.e. “not trans enough.” I have no idea whether she is on hormones, had any kind of surgery, or is legally female. And it does not matter.

What matters are my own issues self-identifying as butch and transgender and speaking out in public. I am not transsexual and I am not trying to pass. I could use being butch as a cover for being trans. I could invalidate my trans self. I could chose not to disclose it.

I came out when I was 17. I’ve always been openly butch and gender non-conforming. Like Mariah, I believe in visibility even though I know that it is dangerous, and sometimes deadly, to be out. There are thugs, there is discrimination. It can be a hard way to live. It can limit your options. The more people who are out, whether it is as gay, lesbian, bisexual, queer, and/or transgender, then the safer it is for everyone. Some people do not have a closet to fall back into.

Mariah and I chatted after the event and apologized to each other. We kissed and hugged and everything was fine, but I was still sweating.

Note: Why We Fight: Remembering AIDS Activism is on display at the 42nd St. Library through April 6. There were two documentary films released last year about ACT UP; United in Anger and How to Survive a Plague. I have a cameo in each.