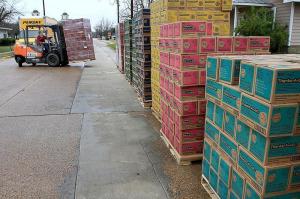 Just when I thought I had finally worked off the weight I put on between Thanksgiving and New Years, just when I was shaking off the end of winter sluggishness, just when I had dreams of spring asparagus and Alphonso mangos, Girl Scout Cookie season arrived.

I hate Girl Scout Cookies.  I hate everything about them. I bought four boxes at four bucks a pop because my office mates sold them for their daughters. My policy is to comply with most forms of work place extortion. I buy something (magazine subscriptions, crappy chocolates, raffle tickets) from everyone in the office who asks; I don’t want to be accused of being cheap or playing favorites.

According to the Girl Scouts, they sell 200 million boxes of cookies each year. Hundreds of them end up in my office. There are open boxes of cookies everywhere. For weeks. I can not get away from them. And, like a perverse version of the kid’s game Go For Broke, I have to get rid of my boxes without eating anyone else’s cookies. This year I have zero tolerance. I am not going to eat a single one.

There was a time (two years ago) when I ate the cookies. I trolled the maze of cubicles looking for them. Thin Mints, Do-si-dos, Tagalongs, Trefoils, Samoas. If there were cookies out there I was going to find them and have one. Or two. I bought a half-dozen boxes and ate a sleeve of cookies at my desk. A box never lasted more than two days. I wasn’t into sharing, I was into numbing the pain.

The pictures on the Girl Scout Cookie boxes represent everything that I hated about girls and tried to avoid. Whenever I was with a  group of girls, I was picked on. When they looked at me they saw a fat awkward tomboy and a target. When I look at the cookie boxes I see my tormentors.

I knew enough to find after school activities that minimized my chances of being bullied. Music school was the best because it did not require getting undressed, picking teams, or wearing skirts, leotards, or tutus. There was very little socializing and a lot of music. I also took a couple of cooking classes at the YMHA. I learned how to bake pareve kosher cookies using margarine (Girl Scout Cookies are certified kosher, but dairy). I learned how to make fruit salad out of fresh fruit instead of opening up a can.

I’m not a big baker. I have three go-to cookies that are way better than Girl Scout Cookies. Baking and cooking are not gendered activities for me. I feel my best butch-transgender self in the kitchen. I make full butter versions of gingersnaps and oatmeal raisin cookies from an old annotated copy of The Joy of Cooking, and I make a dark chocolate chunk cookie based on the Nestle Toll House recipe (but with better chocolate). If you want to be the hit of a pot-luck party, bring homemade chocolate chip cookies. You will be invited back.

There are no mass-produced cookies that are worth the calories (or Weight Watchers points) to me anymore, with the possible exception of Tate’s Original Chocolate Chips. A good homemade cookie, that is a different story. One I will make an exception for.