Donna and I went to see Casa Valentina, the new Harvey Fierstein play. We saw it in previews, so this is not a review. The play is set during a spring weekend in the 1960’s, at a resort in the Catskills that caters to men who cross-dress. There once was a real place called Casa Susanna. It turns out that I have a lot in common with the guys who went there.

Before I knew the words homosexual, deviant, gay, lesbian, butch, queer, or transgender, I cross-dressed. As often as I could get away with it. I did it as early as nursery school, refusing to put on a dress and insisting on wearing blue. I was a stubborn kid. I put on my brother’s clothes. Including his underwear. I had a separate male persona.

In cross-dressing circles there is a lot of discussion about whether the cross-dresser is transgender or an otherwise normal heterosexual guy who just likes to dress en femme. There are distinctions made between straight men who sometimes wear women’s clothing and gay men who do drag. There is an organization, Tri-Ess, dedicated to providing safe spaces for heterosexual men to cross-dress. They have a bill of rights for both cross-dressers and their partners (wives). It is a bit of a 1960’s throwback.

Casa Valentina explores what it means for each guest to have a haven, where they can dress en femme for the weekend. It shows their ambivalence at presenting male, and the pleasure and freedom they experience in dropping the pretense and letting their feminine side “out” in company. It is about the price of suppressing one’s gender and one’s sexuality; of having a secret other life.

It is relatively easy for me to cross-dress in my ordinary life. Butch lesbians wear men’s clothing all the time. I don’t think of it as drag or being en homme. I think of it as being me. It is much easier (in contemporary American culture) for women to go out in men’s clothing than for men to go out in women’s clothing. This was not always the case; in New York there were laws on the books that cross-dressing was illegal unless the person wore at least three pieces of gender appropriate clothing. The law was invoked when the police raided clubs or bars. It applied to both men and women,

There was a time when I tried to wear women’s dress pants and blouses to work. I hated it. I looked ridiculous, and I reverted to men’s or at least man-tailored attire. If I always had to wear “real” women’s clothing when I left the house, even slacks and a blouse, I would probably commit suicide. Or become a recluse. I don’t think I could compartmentalize being butch into a weekend only thing. 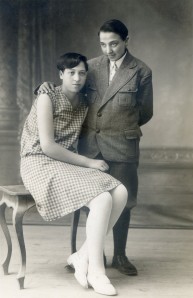 Like men who cross-dress, I have periodically tried to give up cross-dressing and go “normal”, but I can’t. I purged my most masculine outfits when I thought I should make an effort to find women’s clothing that looked good and fit properly. I purged my most feminine clothes when I realized that I would not wear them, that I feel miserable when I think about wearing them, and that I can not expect myself to wear them. The transgender undertow repeatedly pulls me back to the masculine shore. For my own comfort I should stay there.

The transgender undertow is the subject of the second half of Casa Valentina. It is increasingly hard for the main character (and owner of Casa Valentina) George/Valentina to maintain a split life. Fortunately for me, there is no split. I no longer have a secret male persona. I may be living on the border of butch and transgender, but I am living as Jamie, no matter which way I go.

Note: The play opened to mixed reviews – here is a link to the review in The New York TImes, which I think is accurate.