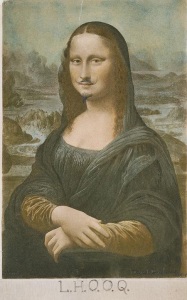 Marcel Duchamp pins the mustache on the Mona Lisa (1919).

Now that I’ve had top surgery, I’d like to stop thinking about what to do next and settle back into my butch/transgender self. Without feeling pressured to be on some trajectory with an endpoint. WIthout being swept away by someone else’s idea of the transgender narrative.

The pressure to keep going is subtle. The unspoken assumption is that next year I’ll be taking T and using the men’s room. That transition has a starting line and a finish line and once the starting gun goes off all the participants are full speed ahead on the shortest path. There is no place in that race for a meandering half-baked genderqueer person.

An acquaintance ran into me on the street and we chatted. Later, she asked Donna how long I’ve taken testosterone for (I don’t) and if I’ve always had a mustache. Yes. I’ve always had what I refer to as my “Fu” but no one said anything about it until I changed my name. My Fu is most prominent on my upper right lip. I neither want my Fu to spread and grow nor do I want it to disappear. I’m fond of it. I never shaved, plucked, or bleached it (chin hairs are another story).

I’d like to regain my patience with whatever it is that I am doing. I lost it in the build up to top surgery, when I was overcome by that feeling of MUST DO THIS NOW. Now there is no rush to do anything else and the quietness makes me uncomfortable. Should I be doing something else? Is it really OK to stop here? I completely understand guys who are in a rush to transition and who want the changes to come as fast as humanly possible (voice drop, muscle mass, jaw square, facial hair). They want to look definitively masculine and be consistently read as male.

I can’t say I’m satisfied with how with how I’m read by other people. I feel misgendered regardless of whether I’m called Sir or Ma’am. My appearance confuses people.

RIght now I feel as trans as I want to be, and as butch as I want to be. I want to keep tinkering until I get the right balance of internal and external gender expression.

Sometimes I feel an internal pressure to transition, mostly due to self-doubt and the fear that if I don’t transition I will never fit in. I can imagine comfort in following a path, a set of directives, with an endpoint of M. I have the awkward deportment of a tween; not comfortable playing with the children or conversing with the adults. It is a lonely place.

Newton’s Third Law of Motion says that for every action there is an equal and opposite reaction. As soon as I start thinking about organized standardized medical transition my rebellious self asks “Who made the rules and why should I follow them?” And ultimately I don’t.

Every morning I brush my teeth and look up in the mirror. Lately I’ve noticed my Fu, and wondered why it is there. For every trans person like me who likes their mustache or is waiting for one to grow in, there is an equal and opposite trans person wishing their five o’clock shadow would disappear. And we are all looking in our mirrors trying to make the best of it.

Notes: Marcel Duchamp was an artist associated with Cubism, Surrealism, and Dadaism, although he avoided being labeled as such. His art is gender-bending, playful, and punning. The photo is by Man Ray, and is of Marcel Duchamp in the created role of Rrose Selavy – which, like any good drag name, has multiple meanings. In French it transliterates into “Eros, c’est la vie” i.e. “Eros, such is life.”

21 thoughts on “Have You Always Had That Mustache?”