“Because you know something is happening here, but you don’t know what it is, do you, Mr. Jones?” – Bob Dylan, from The Ballad of a Thin Man 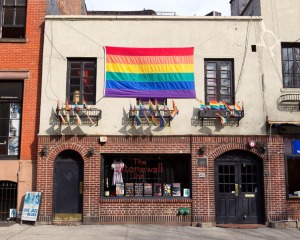 My parents managed to miss the 1960’s. We lived in the city, but we might as well have lived in Podunk. My parents were as conventional as Ward and June Cleaver in Leave It To Beaver, except that they were Jewish and lived in a small apartment.

My parents didn’t listen to Bob Dylan or The Rolling Stones. They listened to Steve Lawrence and Eydie Gorme sing the classic American songbook. They liked the 1950’s, when everyone knew their place and stayed there. They tried to keep up with the Joneses, but they couldn’t afford to.

Once a year my parents took me and my brother to the Washington Square Outdoor Art Exhibit. We gawked at the hippies, listened to the folk singers, looked at the paintings, kept an eye out for the homosexuals, and had Italian Ices.

I wasn’t told much about homosexuals (as my parents referred to them) except that they lived in “The Village”, and did things that were illegal and unnatural. Any man who didn’t get married was suspect, including my mother’s cousin, who didn’t get married until he was in his late thirties. He remained suspect.

There were men on TV who wore dresses as a joke. My parents loved Milton Berle and Flip Wilson. Cross-dressing was hilarious, as long as it was clear that it was a man in a dress. A daughter who insisted on dressing like her brother was not funny. I vaguely knew about Christine Jorgensen; the most famous transsexual in the U.S.  I read about Renee Richards when she came out in 1976. It didn’t occur to me that someone could transition the other way.

I live a short walk from The Stonewall Inn. Christmas decorations go up the day after Halloween; rainbow flags go up in our neighborhood right after Memorial Day. Thousands of rainbow flags, large and small, hanging in store windows, fluttering off fire escapes. No trans flags in sight.

I came out a few years before the rainbow flag was created. Then, the symbols of the movement were λ, the pink triangle, the intertwined double women’s symbol or double men’s symbol, and the labrys. Rainbow flags didn’t become ubiquitous in New York until the early 1990’s. 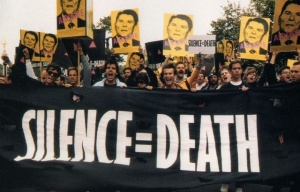 Along with other members of ACT UP (the AIDS Coalition to Unleash Power), I derided the rainbow flag as a “gay happy face” and carried the SILENCE = DEATH banner in gay pride marches. For many years there was not a lot to celebrate.

On Friday, the Supreme Court ruled 5 to 4 that marriage between two men or two women is a constitutional right in all states. It is a good ruling, and I’m glad that it is the law. The dissenting opinions are chilling. There is still a lot of hate. There is still a lot of resistance. There are still four justices living in the past, unable to accept what is happening all around them.

The day of the ruling was also the 11th Trans Day of Action. This event takes place on the Christopher St. Pier, and is organized by the Audre Lorde Project and the Sylvia Rivera Law Project. The Trans Day of Action honors all trans lives, including those usually left behind by respectability politics: sex workers, homeless people, prisoners, and undocumented immigrants. Speakers shared their stories of being harassed by the police, and attacked and disrespected on the street.

There were over a thousand Trans and Gender Non-Conforming people on the march. Donna came with me. We marched for a while and then stepped out of the street to watch everyone go by. The crowd chanted “Fuck your assimilation, all we want is liberation.” A man waiting for the bus asked us if this was part of the Marriage Equality celebration, and we told him no, that is was part of the Trans Day of Action. He took a long look at us, and looked at the march, and looked at his watch, and hailed a taxi back to the relative safety of the Upper East Side.

Notes: Gilbert Baker created the original rainbow flag in 1978 in San Francisco; it was recently acquired by MoMA (The Museum of Modern Art). Renee Richards became famous when she was barred from playing professional women’s tennis; she sued the United States Tennis Association and won. The Ballad of a Thin Man is my second favorite Dylan song (LIke a Rolling Stone is #1). You can listen to it here. I sing that line to my dog, Gracie, when she gives me that confused puppy look. You don’t want to hear my version.