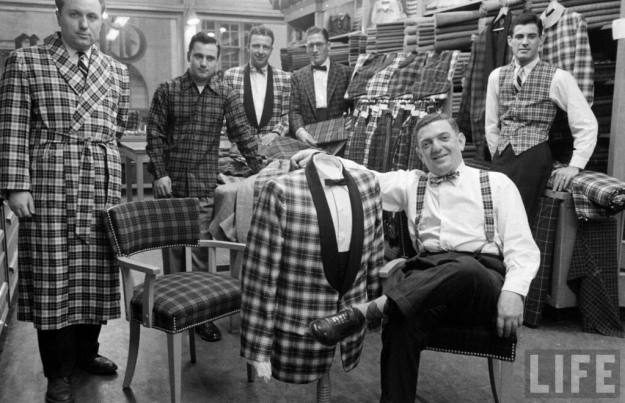 Usually I break out my flannel shirts right after Labor Day, but it is the middle of September and the weather has not changed. It is still summer in the city. I’m wearing my summer plaid.

My summer plaid are Madras. I didn’t plan to have a half-dozen Madras shirts hanging in my closet. I bought them, over the last two years, one at a time, unable to resist the patterns. All summer long, when I didn’t want to wear a T-shirt, but I didn’t want to wear a dress shirt, I threw on a Madras. Then I realized that Madras is as close as you can get to a summer flannel shirt. I love plaid.

I don’t understand how my personal style developed; how plaids got into my subconsciousness. If it is a butch thing, or a guy thing. Why plaid instead of stripes or paisley. Why plaid instead of Tattersall or gingham. How my child brain synthesized the idea of masculinity down into a plaid shirt. How I drifted into some sort of Ivy League goes hiking hybrid style.

My Madras are classic plaids; not the pastel Easter egg, flashy fluorescent, or psychedelic patchwork plaids. My plaids wouldn’t be out-of-place on flannel. The British brought the Scottish Tartan patterns with them to India, wove them into Madras cloth, and then spread them all over the rest of the British Empire. From India to Bermuda. Madras shorts, pants, jackets, and shirts made the jump to the U.S. in the 1950’s. They have been a preppy staple ever since. I only have the shirts. This article from Gentleman’s Gazette explains everything you might want to know about Madras.

I am lucky that authentic Madras shirts are still made. Even if they are not fashionable, they are still classic. They have not gone the way of bell bottoms or cargo pants. They are not a fashion crime, e.g. wearing over the calf tube socks with shorts.

I like timeless classic men’s fashion. I would like to wear out my favorites. To go back to a store and replace an object with the exact same item. The reality is slightly different. Lapels change, collars change, colors change, and the cut changes. There are a few classic outfits from each decade that could be worn today, but most outfits look dated. Men’s fashion changes more slowly than women’s, but it does change. A lot of guys don’t change with it.

Two summers ago, on a humid Saturday morning, I was hanging out at the dog run with Gracie. I looked around and noticed that every other human was wearing either no socks, no-show socks, or really low-cut ankle socks, and that I was wearing Thorlo 1/4 ankle crews. They stuck up about two inches over my New Balance sneakers. Although not as bad a faux pas as tube socks, I realized that while I was not paying attention, everyone else was. My dilemma was to either continue wearing something that was clearly out of style (although in perfectly good condition), or go out and buy a lot of socks. I went to Paragon Sports and bought new socks.

The most recent style change that affects me is the slimming down and untucking of casual buttoned shirts. This isn’t new, but it is at critical mass. I’ve always tucked in my shirts and rolled up my sleeves to compensate for being short and having hips. Of my six Madras shirts, only two (custom-made) are short enough (and wide enough at the hips) to wear untucked in public. I will continue to wear the others tucked in, in the classic way, like a clueless middle-aged guy, because I love my plaid.

Notes: If you were expecting an update on Donna’s broken ankle, she is in residential rehab at Village Care doing two hours of physical therapy a day. I can walk there in twenty-minutes from our apartment. They allow me to take her out in a wheelchair; we have gone around the corner to eat, and across the street to see a documentary at the Film Forum (Black Panthers: Vanguard of a Revolution). Recovering from a broken ankle is boring, but I’m doing my best to amuse her.

14 thoughts on “Mad About Plaid”