I came to a fork in the road and I moved the fork.

When I started writing this blog, I stood on the border of butch and transgender, with one hiking boot firmly planted on each side. I was unable to budge. I had never truly, fully, thought of myself as a woman, but as an increasingly older boy. I had suppressed and avoided making a choice, all under the rubric of being butch. 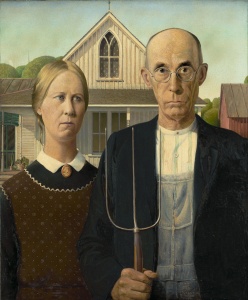 The sticking point was that as masculine as I felt and looked, I didn’t picture myself as a straight middle-aged white man. I could not authentically place myself in that construct. Conversely, I couldn’t tolerate picturing myself as a middle-aged woman. The dysphoria was too raw. No one over 40 wants to picture themselves as old, but I still wanted to be a boy. I did not know who I wanted to be like when I “grew up”. I knew I was trans, but I didn’t know what words to modify it with.

I share a history with kids who were raised as girls but didn’t want to be girls. With tomboys, with kids who rebelled against their parents and teachers, who created their own internal boy lives, and who defiantly stayed true to their boy selves. Whether they identify as butch or transgender or any label on the spectrum. Whether they identify as women, men, both, or neither.

I feel a kinship with masculine women and feminine men. With people who look queer. With transgender people who don’t always pass. With people who walk down the street and go about their business with their chins up knowing that other people are staring at them.

I don’t always feel welcomed as trans when I’m in a transgender space, or as butch when I’m in a lesbian/gay space. I feel like an intruder. I haven’t been to a lesbian event in a while (unless Staceyann Chin’s wonderful one woman show, MotherStruck, at The Culture Project, counts). I’m not sure if it is because there are so few lesbian events, or if I’ve unconsciously stopped going to them.

I’m not sure why I hold on to my butch identity except that it is my history and I am not ashamed of it. I don’t think I’m gaining any privilege by identifying as butch. While there is some status in the community for being a young and handsome butch; I there isn’t much for being a middle-aged butch. I am, however, keenly aware of my middle class and white privilege. In many ways I have it easier than my friends (pension, health benefits, nice home, partner, and dog), even if I can’t comfortably use a public bathroom.

It saddens me when I see trans men try to distance themselves from butches, or advocate to take the T out of LGBT, as if they have nothing in common. It saddens me when butches claim that trans men are traitors, or when they try to save them as if they were misguided lost souls. If one is secure in one’s identity and life choices, then one should not be threatened by, or be dismissive of, someone who came to the fork in the road and took the other path.

Gender isn’t a straight line spectrum. There is no imaginary or fixed line that I can cross that will take me from butch to transgender. The border is wherever I choose to place it. I admit that I keep shifting it, each time I take another step, so I can stay on that border.

Update: One of the comments is noxious and is from someone who has harassed and doxxed trans women. I prefer not to engage with hate speech on my blog. Please google this person before engaging with them.

Notes: There has been a lot of discussion about the loss of lesbian spaces across the country (some of which is transphobic and transmisogynist). Broadly published The History of Lesbian Bars which talks about why lesbian bars are disappearing/closing, and includes an excellent embedded video by JD Sampson and Drew Denny on the topic.

26 thoughts on “The Fork in the Road”