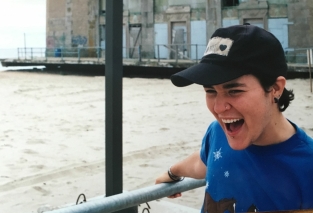 Ryan Powell died last week. I know Ryan from the transmasculine support group at the LGBT Community Center. Ryan was sweet. He listened intently, and without judgement. In a group you can tell whether someone is really listening or just waiting to speak. He didn’t interrupt, he didn’t cut anyone off, he didn’t roll his eyes, or keep turning the conversation back to himself. He wasn’t trying to be cool. He said he was in recovery and struggling. He died of a heroin overdose. He was 34.

I know random things about Ryan, but not his whole story. It is hard to get anyone’s whole story. He told me that he transitioned in his teens, then realized that he was not binary, and went off testosterone. I know he didn’t like having facial hair. I know he liked to play with make-up and nail polish. I know he was an artist. There is so much I don’t know about him.

I talked with Ryan about my ambivalence to go on testosterone. His advice was to wait, not to force a decision, to let it come to me. I wanted him to be a part of my world. I missed my chance. 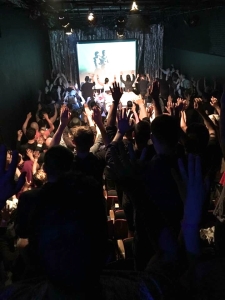 Prayers at the memorial.

Ryan had demons. He also had a fierce group of friends in his recovery groups who wanted to shelter and protect him. They came to his memorial service, devastated by his death. By the senselessness of it. Every queer person I know has demons. Every trans person I know has demons. Every time I lose a friend I lose a little hope of ever quieting mine.

I am angry because there are not enough resources, not enough recovery programs, and not enough follow through. It is so much easier to get heroin.

My demons tell me that there is something wrong with me. That I am unlovable. Grotesque. An embarrassment. My demons are the legacy of a narcissistic mother and grandmother. Of schoolyard bullying. Of being a misfit. My demons are my connection to my childhood. When I was a child I tried to be stoic, to numb it out, to withdraw, to do anything to not feel that pain. The demons know where the pain is hidden, and how to let it out.

The question is always what to do with the pain. I can talk about it in therapy. I can work it out at the gym. I can go for a walk with Gracie. I can ask Donna for a hug. I try not to stuff it down with food or drink. I never learned how to sit through the pain. Sometimes I run from it. I am still trying to find ways to live with it.

My demons tell me I’m preposterous. A self-parody. Artificial. Deluded. All of this is true. And false. My gender may be preposterous, and full of contradictions, but it is mine. It is no more ridiculous than anyone else’s. I have a right to live in it. 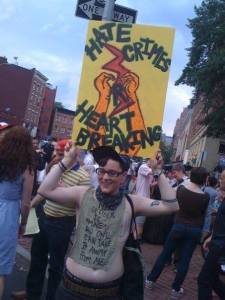 There were hundreds of photographs of Ryan at the memorial. In this one, taken at the 2009 Trans Justice March, Ryan is wearing a home-made bib that said “MY GENDER IS *MINE*, NO ONE CAN TAKE IT AWAY FROM ME.”

I look at those photographs and I see a Ryan who is happy, vulnerable, silly, thoughtful, and free of his demons.

Note: I will be at the Philadelphia Trans Health Conference on Thursday afternoon and Friday. Look for me and say hi.