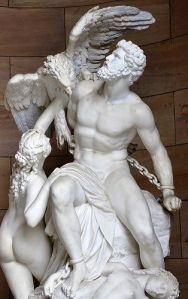 Prometheus and the Eagle

Before the transmasculine support group at The Center starts, while we are siting around in a circle, I compare myself against everyone else. I’m trying to suss out who reads as female, as transitioning, or as male. I pay attention to clothing, facial shape, voice, and beard growth. I know I am ranking all of us, with female at the bottom and male at the top, with pre-T lower than already on T. I’m hoping that I’m in the middle.

I’m envious of the trans men with square jaws and beards. I’m envious when someone I know starts testosterone and moves past me on the transition line. I’m ashamed to admit that I place a value on how masculine appearing they are. I know this is misogynist, but it happens. I feel left behind. Fortunately, once we start talking I start listening and I stop looking.

I like that the group is inclusive, and that there are other members who are not following the standard transition narrative, but I am also seduced by the masculine binary (regardless of the sexual orientation). This is because I use their masculinity, and my proximity to it, to bolster my sense of my own masculinity. Once, our group leader asked us to separate into two groups: one for trans men and one for non-binary (I forget what the discussion topic was) and it pissed me off. It felt like elementary school, with the teachers separating the girls off from the boys in the playground. I wanted to go with the boys. I didn’t want to be excluded for being non-binary.

I don’t understand why I need to prop up my masculinity. If I could wave a magic wand I’d probably choose to stay how I am, use gender neutral pronouns, and never be (mis)gendered as female again. Maybe I’d lower my voice, and square my chin a little. I’d live in the world as a validated non-binary person with a masculine gender expression.

Rationally, I believe that trans is trans. That genderqueer, non-binary, transgender, trans man, and FTM, are different, but equally valid identities. One is not purer or better than the other. My dinosaur brain disagrees. It looks at masculinity like a standardized exam; at a minimum you need a passing grade, and the closer you are to 100%, whatever that means, the better. My dinosaur brain thinks I’m failing and that non-binary is not the real thing.

Insecurity, i.e. feeling that I’m not “trans enough”, makes me want to distance myself from everything female and/or feminine. It makes me question everything I’m doing and everything I’m wearing. I need to accept that while non-binary is not the farthest point away from cisgender female on the imaginary gender spectrum, it is my point. Transmasculinity is not compulsory masculinity and it doesn’t have to mimic identifiable forms of conventional masculinity. I’m not sure what non-binary masculinity looks like, but I think it looks a little like me.

Notes: So what is this masculinity that I keep writing about? Is it an inner sense of self, my gender expression, or just a set of patriarchal privileges that I want to experience? Amos Mac’s photo essay Masculinity Means sheds some light on it. Warning that the subjects are young, hip, and from New York.

18 thoughts on “The Seductiveness of Masculinity”