Urbino, on a sunny day.

I told Donna that no one wants to hear that she was disappointed by our trip to Italy. No one cares that it was rainy and cold for 12 days in a row, or that her intermediate level Italian wasn’t as fluent as she hoped (she eavesdropped, but she was unable to follow conversations). No one has empathy for someone who spent three weeks traveling in Italy and then complains about it.

I had a good time, especially in Venice. We stayed there for a week. It is a walking city, and late in the afternoon, while Donna napped, I went out for an hour stroll along the quiet back and side canals. It is possible to get away from the hoards of tourists; they mostly stick to a few major thoroughfares and the area near Piazza San Marco. Near Piazza San Marco, even in October, the crowds were overwhelming. 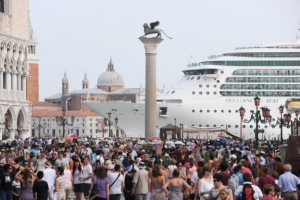 The Venetians are trying to put some limits on tourism, especially giant cruise ships. I can relate to their anger. I live near Chelsea Market, which is mobbed by tourists. It is too frustrating for me to shop there on the weekend. Some days I just want to knock the selfie sticks out of my way and tell them that they are in a market, not Madame Tussauds Wax Museum.

After Venice, we went to Ravenna to look at 5th and 6th century mosaics. Then we drove to Le Marche and Umbria, and poked around churches, abbeys, museums, hill towns and castles. We drove to the Adriatic coast for a leisurely lunch of spaghetti with clams and mixed grilled fish. I took my afternoon walks in mist and drizzle. There were a few churches we wanted to visit that were closed; they were damaged by the August earthquake in Amatrice  (6.2 magnitude). We briefly talked about what we would do if we felt tremors or aftershocks. Donna used to live in San Francisco. She said you wait for the earthquake to stop, throw on your clothes, grab your wallet and passport, and get out of the hotel ASAP. We didn’t feel any aftershocks while we were there, and didn’t give it much thought.

I never felt at risk in Italy. I took precautions against pick pockets in Venice. I drove carefully on the twisty mountain roads and the Autostrada. I was not afraid of being mugged or of being attacked for being queer (or trans). In the U.S., I’m always on guard. I’m always aware of the possibility of violence. I feel the tension in the air.

I did not feel gender policed in Italy. I felt comfortable in my own skin/clothes. I don’t know whether this was the Italians, or if I’m in a different place with it, or a combination of the two. I felt normal awkward tourist feelings; the desire to eat a good dinner without committing a faux pas (or in Italian, a gaffe). I tried not to eat the bread before my food arrived and I made an effort to order espresso instead of cappuccino after noon.

I relaxed. Donna did well despite her complaining; she managed to do a lot of walking and we visited museums and churches without a problem (we took breaks and she had to stop and rest, but that is normal). She didn’t act like someone recovering from heart surgery or a broken ankle. It wasn’t our best trip together, it certainly wasn’t our worst. We can still travel together and have fun. I missed Gracie, and I’m glad I’m back.

Notes: While I’ve lived through terrorist attacks and super storms, I’ve never experienced a major earthquake, and would not know what to do. This is a link to the U.S. earthquake preparedness site. I’ve also gotten lax at home; I should make sure I have three days of drinking water, some more canned food, and fresh batteries on hand (we were without power and running water for 5 days after Sandy). I am thankful that we had travel insurance for this trip, and that we did not have to use it.