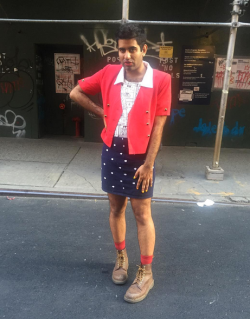 At each of the four NYC pride week events I went to (Trans Day of Action, The Drag March, The Dyke March, and The Big March) I saw a smattering of what, for the lack of a better term, I will call “people with beards wearing make-up and dresses.” Some were gay men, presumably cisgender. Others were either gender non-conforming, non-binary, genderqueer, or trans. I couldn’t tell by looking.

Some wore garish or exaggerated costume, some were in classic drag, and some were dressed in an outfit that would not have attracted attention if it was worn by someone else. I mean someone who “was trying to look like a woman is expected to look”. This last category, of mixed gender expression, is the most visibly jarring. Picture a masculine haircut, a trim beard, a little black dress, and pumps – or what Alok is wearing, above.

This is not an attempt at the air-brushed androgynous look. This openly contradicts the “rules” of passing. By showing a heavy five o’clock shadow or a beard they are not hiding or obscuring that they spent a significant part of their teen/adult life with high testosterone levels. END_OF_DOCUMENT_TOKEN_TO_BE_REPLACED