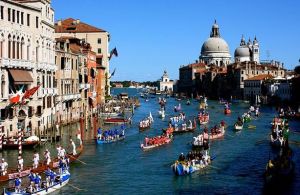 I almost made it back to Venice. Donna broke her ankle in two places on Saturday. We won’t be going anywhere anytime soon.

I’m angry with her for falling, for rushing, for not watching her step, for being Donna. She was on her way to the swimming hole, and came back to get sunscreen. She missed the step from the porch to the walkway. I didn’t see it happen. I just heard her cry out.

I was planning on staying home and writing a post about going back to Venice. Instead, we took a trip to the emergency room.

Our first trip abroad together, in 1983, was to Italy. We flew into Rome and took the train to Venice. When we arrived in Venice there was a crowd outside the train station, and the Vaporetto weren’t running.

We arrived on the first Sunday in September. In the middle of the Regata Storico. There was nothing to do except look at the boats and wait for the Grand Canal to reopen so we could get to our pensionne. I ate my first gelato.

I learned a lot about Donna on that trip. I learned that she loves the unplanned and unexpected, that she likes to change the itinerary, and that she likes to travel without reservations. We were going to stay in Venice for five nights but had such a good time that we ended up staying for ten nights, and skipped Emilia-Romagna (Bologna and Ravenna) before decamping for Tuscany.

Donna doesn’t like guidebooks. She hates lists of “10 things You Must Do In …”, even though she’d want to do five or six of them anyway. She thinks of herself as a traveler not a sightseer. She is fond of Romanesque churches and Roman mosaics. She finds them in out-of-the-way places. We go out of our way to visit them. After Venice, we were going to drive through Umbria and Le Marche.

If you are in a long-term relationship you probably have a set of meaningful one word phrases you both use. For us, they are Grazalema and Bologna. END_OF_DOCUMENT_TOKEN_TO_BE_REPLACED