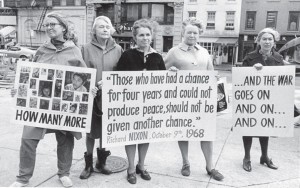 Women from the Greenwich Village Peace Center, 1968. Grace is in the middle.

I saw, and experienced, their character flaws. Short tempered. Manipulative. Critical. Stingy. Greedy. Arbitrary. Narcissistic. Powerless. Resentful. I swore that when I grew up I would do better. I would not repeat their mistakes.

My early exposure to teachers, other kid’s parents, school psychologists, and librarians did not improve my attitude towards adults. I thought adults were boring, tedious, and rigid. They all insisted that I act like a girl.

It wasn’t until I came out, and started doing political work, that I met older adults whom I could relate to. They were non-conformists. I saw their flaws, but I also saw their strengths. I might not want to be just like them, but I definitely wanted to pick and choose from some of their character traits.

I admired the serious calm anger of the pacifists at demonstrations. How they would walk right up to a line of riot police and then sit down, without flinching, without showing fear. At demonstrations they took to the streets and blocked traffic as if it was the most natural thing in the world. I admired their clarity and how their actions were consistent with their beliefs. I studied the history of non-violence. I read Gandhi, Dr. King, and Barbara Demming. Some of it rubbed off on me. END_OF_DOCUMENT_TOKEN_TO_BE_REPLACED

I’m not a Pollyanna or a Little Lord Fauntleroy. I don’t expect the best from everyone, but I do like happy endings. Not happy as in a boy falls in love with and gets the girl, but happy as in the cop gets indicted by a Grand Jury after shooting an unarmed black man kind of way. Happy when justice prevails. The story doesn’t always go my way, but I am optimistic that things will change. Not on their own. Nothing changes without action.

For the first eight weeks after my top surgery, Donna refused to look at my naked chest. She was queasy about my surgery, and was afraid she would react negatively to the scars and the contours. The first four weeks were not a problem. I slept in the other bedroom because I snore like a rusty chainsaw when I sleep on my back. I wore a T-shirt and boxers around the house. I asked her if she wanted to look. I asked her what she was waiting for.

While Donna was in the hospital, and unable to get out of bed without assistance, I teased her by starting to lift my shirt. At one point she dared me to do it, but there were two nurses in the room and I didn’t think I could flash her without them noticing. END_OF_DOCUMENT_TOKEN_TO_BE_REPLACED