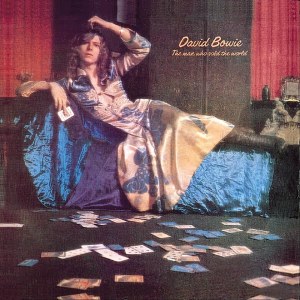 David Bowie said it best “You must understand that it’s not a woman’s. It is a man’s dress.” If a dress is made for a man, or bought by a man, it becomes his. He owns it. The dress has no gender; the person wearing it does.

There was a cold snap and I broke out my favorite flannel shirt. It is a classic L.L. Bean, a Black Watch Plaid, in a women’s large. It used to look really good on me, before I lost weight. Now it is super baggy. I can still wear it, but I’m hesitant. It buttons to the left (the girl’s side).

I’m struggling with this. My weight is down from 175 lbs. to 140 lbs., but my height is still five foot four. My eyes have not adjusted. I can only see how much weight I’ve lost when I try to wear my old clothes. I’ve downsized my jeans several times and replaced a few worn out T-shirts. My button-down shirts are between two and five years old. They are between big and too big.

I stopped buying dress shirts because I knew I was going to stop working. Then I went on a self-imposed flannel hiatus because I have slew of old flannel shirts. It didn’t last. Then I decided to completely stop shopping for shirts because I want to wait until after I have top surgery. If I need to shop, I will stick to sneakers and hiking shoes.

It is almost impossible for me to buy a women’s shirt off the rack. I’m petite (I hate that word) and I won’t touch anything that has darts, princess seams, funny collars, or odd plackets. I’ll wear clothing made for women that looks like it is made for men. There isn’t much out there. It is also almost impossible for me to buy a men’s shirt off the rack. I like the styles, but the sleeves end below my fingertips, the body is too long, and if the chest fits it doesn’t close over the hips (and if the hips fit it is too big everywhere else).

I have a half-dozen fabulous custom-made dress shirts from CEGO shirtmakers. They were perfect when I weighed 165 lbs. The neck fits, the sleeves are the right length, the body is the right length, they fit over my hips, and they button to the right. They are too big, and I don’t wear them anymore.

I also have a half-dozen custom (women’s) classic Oxford cloth shirts that I bought at Brooks Brothers when I was 155 lbs. They still look good, even though they are a little baggy. Except that they button the wrong way.

It is my quandary, to wear them or to give them away. Donna claims no one else notices which side my shirts button on. And, she reminds me, no matter which shirt I am wearing, I read as masculine, not male.

Some guys are oblivious to fashion and some pay attention to what other guys are wearing. They’ll snicker if they see a guy wearing a brown belt with black shoes, or wearing blue socks with a black suit. I don’t want to be one of those guys. GSElevator writes about this in How To Dress The Part On Wall Street. He’d notice the buttons. Do I care about him? Am I so shallow that seven buttons have me in a swivet?

It turns out that this is not entirely true. Levi’s marketed an “ex-girlfriend jean” for men. A tight punk rocker cut. Most guys don’t borrow their ex-girlfriend’s clothes (and why the ex, instead of just girlfriend?). For the record, over the years, Donna has purloined several of my T’s and flannel shirts. I have never, ever, ever, worn a piece of her clothing.

I have a fantasy that men’s shirts will fit better after I have top surgery. Logically, I know that the discrepancy between my chest and my hips will still make it difficult for me to buy a shirt. If I want a shirt that buttons to the right and fits, I will have to go back to CEGO.

A survey of my closet turned up over twenty flannel shirts. Only two (both L.L. Bean mediums purchased last year during the hiatus) fit properly, and they both button on the left. I will need to look back at David Bowie and think of them as butch/transgender shirts. Because that is who I am.

Note: After an extensive investigation it was discovered that GSELEVATOR never worked at Goldman Sachs. The New York Times expose of the Tweeter is here. Some people take Twitter way too seriously.