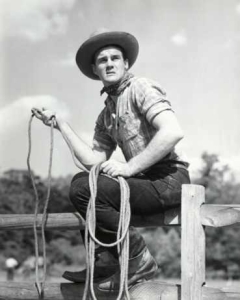 Getty_Images  It is hard to lasso Androgel.

Donna caught me by surprise. She said “Stop saying that you’re not taking testosterone because I’m against it. I don’t want to be in that position anymore. Make up your own mind. Do whatever you want.”

It would be nice if Donna had said this lovingly, with the caveat that she will support me whole heartedly. That I will always be her Jamie no matter what path I take. Whether I am butch or trans. That I should do whatever I think is best for me. But that wasn’t exactly what she meant.

In January Donna had open heart surgery to replace a heart valve. The outcome, according to all her doctors, is excellent. The valve took, she didn’t get an infection, her heart is pumping properly, her heart rhythm is good, she doesn’t have atrial fibrillation.

She was taking three medications for her heart: a beta blocker, an ARB (angiotensin receptive blocker), and a blood thinner (warfarin). Both of us hate taking drugs. Drugs have side effects, rules about when and how to take them, and dietary restrictions. She’s got a perpetually runny nose, a sensitive digestive system, and trouble sleeping. She wants her old life back. Carefree.

Donna’s cardiologist gave her the go ahead to start cardio rehab (increasingly difficult aerobics while wearing a heart monitor). She felt stronger and more like herself. One Saturday in April we went to the Egon Schiele show at the Neue Galerie, ate a late lunch at the museum’s cafe, took a meandering walk across Central Park, and went to see the movie Clouds of Sils Maria. The next day she decided to go off the beta blocker.

She didn’t discuss it with me. She told me she was going to do it. She told her cardiologist she didn’t like the side effects of the beta blocker and wanted to see how she felt going off the drug. He offered to give her a different beta blocker, with potentially different side effects, but she wouldn’t budge.

I lost it outside his office. On Madison Avenue. I jumped up and down on the sidewalk and told her she was just like a schizophrenic who insists on going off their medication because they feel good. That the reason she felt good was because the medication was working. I was furious at her for going off the drug before she completed cardio rehab. I begged her to try changing to a different drug to see if the side effects were more manageable. She said no, she wanted to do it her way. We took the subway home.

I believed we had an unspoken agreement that we were in this together. Donna believed she was autonomous.

Within a week Donna felt weak and unable to do anything that required exertion. She dropped out of cardio rehab. I couldn’t find my empathy. I felt helpless. Scared. Angry. I told her it wasn’t fair. That I had discussed every decision about my transition with her. I waited to change my name. I waited for top surgery, I stopped thinking, or at least talking, about testosterone.

She looked at me and said all that was true. I had talked it through. I had waited. She said she couldn’t do what she had asked me to do. She didn’t want to go through the pro’s and con’s with me. She didn’t want to take my feelings into account. She apologized. Another week went by.

She talked to her cardiologist and decided to try a different beta-blocker. She said she’d discuss it with me, but make her own decisions. A week later she was feeling good enough to go back to cardio rehab. Her cardiologist told her she could get off the warfarin. She is eating kale, mangoes, and avocados again. She told me to do whatever I want. Not to wait for her consent.

The rules have changed. I’m still on the fence about testosterone. But this time it is my fence.

Notes: Mo Weinert wrote the series “I Was a Teenage Unicorn” for Original Plumbing, which you can find here. It is part of a series of posts about Mo’s decisions to get on, and then off, low dose testosterone. janitorqueer and Neutrois Nonsense also have a series of posts about their experiences on low dose testosterone. Not surprisingly, all three have different expectations and experiences with low dose T.

19 thoughts on “Sitting on the Fence”