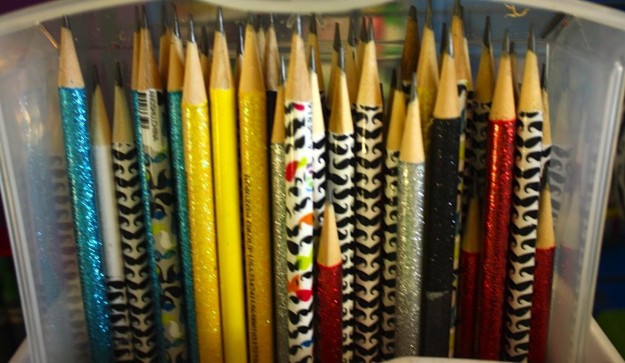 I ended up being listed as Queer and Genderqueer in Callen-Lorde’s computers (with no preferred pronouns). Callen-Lorde is NYC’s LGBT health clinic. You make an appointment, fill out the forms, talk to a nurse, get your blood drawn, wait two weeks for the results, and if everything is good, you can get a prescription for cross-gender hormones. Normally I’m pretty speedy filling out forms. I’d already put down my sex assigned at birth (F) and the sex on my insurance (F), but I was flummoxed by these two questions:

If the questions were fill-in-the-blanks I would have answered Sexual Orientation: butch (attracted to femme women) and Gender Identity: trans. Instead, I held the pen in the air and just stared at the questions. Confused. Lots of choices, but none of them are mine.

Sometimes I say I am gay, but I know Callen-Lorde is asking whether I am attracted to men. I’m not, I just dress like one. I generally don’t use the word lesbian to describe myself, I use butch, but that isn’t on the list. I am definitely not bisexual. I think of myself as queer, but more on the gender side than for my sexuality. I do not identify as straight. I hesitate at checking off “Something Else” because there is no place to write in “butch”. “Decline to Answer” seems cantankerous. I think I should be able to answer this question more easily, but sexuality is quirky.

I do what they tell you to do on multiple choice exams (leave blank what you can’t answer and come back to it later if you have time) and I skip to Gender Identity. I figure I can work backwards to Sexual Orientation once I pick out a Gender Identity. The choice is between TransMale/Transman, Genderqueer/Nonconforming, and Something Else. I identify as transmasculine, but not as a transman (or trans man) because it implies identifying as a man, which I don’t do. I fit Genderqueer (although I think non-binary fits better) and I am definitely Nonconforming. But I think of myself as trans. Trans is not on the menu.

I pick Genderqueer/Nonconforming for my Gender Identity, and then check off Queer for my Sexual Orientation. It is not exact, but it is consistent. At least I didn’t end up choosing Lesbian and TransMale/Transman. I should have picked Something Else and Something Else, and scribbled in the margins. The internal debate throws me off-balance and makes me doubt myself.

The good news is that now I am officially a client. I have a primary care physician, had my basic blood work done, got a referral for a colonoscopy, and had a physical exam. The bad news is that I have high cholesterol (total is 282, LDL is 164).

Shyvon, the Nurse Practitioner who examined me, was pleasant and gentle. She did a manual chest exam and a pelvic exam. It was the least unpleasant pelvic exam I’ve ever had, but it still hurt. It left me shaken and unsteady. We talked about my cholesterol while I pretended I was fine. I didn’t re-start the conversation we had at my intake about possibly going on low-dose testosterone. The timing was off. I’ll get another chance.

While Shyvon talked to me about changing my diet, my brain was racing ahead. I thought “I’m not going to take a Statin. I don’t want to put Lipitor or any other drugs in my bloodstream.” There is a part of me that feels the same way about testosterone. There is another part of me that recognizes that it is an entirely different situation.

Notes: “What the Ruby Rose Obsession Misses About Gender Fluid Lives” by Micah (of Neutrois Nonsense) touches upon the issues of having a gender that is not easily recognized or ticked off on forms. The post “On Sex/Gender Checkboxes” from The Intersex Roadshow discusses the problems of multiple choice forms for sex/gender, and the need for fill-in-the-blank options. Both are good reads if you hate filling out forms.

18 thoughts on “Why I Hate Filling Out Forms”