Some days I feel like I’ve accidentally stepped up to a carnival game called Guess What I Am. The odds are stacked against me. The game ranks secondary sex characteristics over gender expression and gender presentation. It ignores my intent. It doesn’t recognize the middle ground.

When asked “What are your preferred gender pronouns (PGPs)?” I usually stammer out “they”. I hate pronouns. Most people use feminine pronouns when they talk about me. It doesn’t feel right, but I don’t stop them. Three years into writing this blog, I remain pronoun challenged.

I am not comfortable with either he or she, or Sir or Ma’am, although Ma’am is the worst. I’m OK with they, Jamie, or nothing. “Nothing” is easy with honorifics and titles. On forms, I leave the title box blank. If I have to fill in something, I use Dr. or Prof. I haven’t seen Mx. on a form yet, and I’m not sure I’d use it. “Nothing” is difficult with pronouns.

I choose to wear masculine clothing, have a masculine haircut, and carry myself in a masculine manner, but I don’t use masculine pronouns. I conflate masculine pronouns with taking testosterone. I read as masculine, but not necessarily male. I like how I look. I don’t do anything to make it easy to read me as female. When I go out I get Sir’d and Ma’am’d and a combination of the two. I cringe when people apologize after calling me Sir. 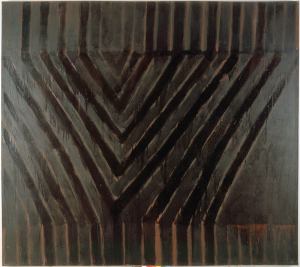 Last week, Donna and I went to see the Frank Stella show at the Whitney Museum. Donna used a wheelchair provided by the museum. I pushed. We moved slowly through the show, tethered together. An intimate way to look. What struck me was not Stella’s painting, but his explanation of his work “What you see is what you see.”

Stella was one of the first painters to break away from Abstract Expressionism. Art critics called his work Minimalism, because critics like to label things. The Tate Modern defines Minimalism as “no attempt is made to represent an outside reality, the artist wants the viewer to respond only to what is in front of them. The medium (or material) from which it is made, and the form of the work is the reality.”

I want people to see what they see. Not to judge me by whether I “pass” as a man. I want them to stop trying to find the mark that identifies me as female. To let go of the one drop rule, the rule that says that my sex assigned at birth trumps everything else. I want them to see my reality. I am not someone who should be called Ma’am.

I know a handful of people who identify as either non-binary, genderqueer, or gender non-conforming. Some of them use he. Some of them use they. Some go by she. If you tried to line them up and guess their preferred pronouns, chances are you’d get them wrong. It doesn’t correlate with how masculine or how feminine they look. It correlates with their reality, and how willing they are to insist that other people respect it.

The U.K. is ahead of the U.S. in using gender neutral honorifics such as Mx., however, according to this article in Time, Mx. is slowly worming its way into American usage. Misconceptions about Mx., from the blog Spacious Perspicacious, is an excellent short analysis of the word.

16 thoughts on “Step Right Up Ladies and Gents”